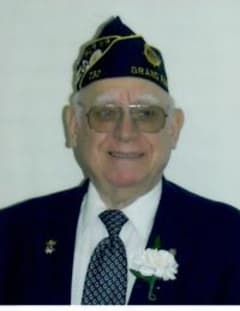 John was born February 23, 1931 in McClure, Ohio to the late John George Schlotz and Esther Ruehle.

John worked as a salesman for Toledo Hardware and as a substitute custodian for Otsego Schools from both of which he retired.

John will be deeply missed by all who knew and loved him.

The family requests the memorial contributions be made to Hospice of Northwest Ohio; Alva N. Sidle American Legion Post #232; or the charity of your choice.

Habegger Funeral Services is honored to serve John’s family. We invite you to share a fond memory or condolence by visiting www.habeggerfuneralservices.com.

David and I are so sorry for your loss, Mae. We have such fond memories of such a great guy! We remember him cleaning at Otsego after basketball games - we were cleaning up the concession stand and he the gym and fun conversations. Then, much later, when we started attending the fish fries in Grand Rapids, being greeted at the door with big smiles and hearty greetings. Always so good to see him. May God's comfort be with you.
- Donna Mertz